Another important trend in the first half of the year is related to the spread of unusual types of malicious programs, such as file-based, macro and micro-file malicious software. Trend Micro recorded a 250 percent increase in the number of detections of one particular microfile file malicious program – TinyPOS – compared to the second half of 2017, which may be due to the increased ability of these types of malware to bypass security features that use only one protection mechanism.

Also in the first half of 2018, 15 large-scale data leaks were recorded, as a result of which more than one million records were stolen. Almost half of the leakage was the result of inadvertent disclosure of data, not malicious acts. Most of the leakage occurred in the health sector. 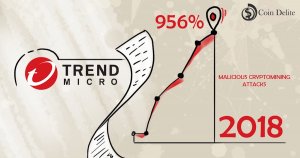 The full version of the report on the results of the study is available on the link.

“The observed change in the threat picture is consistent with what we have seen over the years: cybercriminals are constantly changing their tools, tactics and techniques to increase their infection rates,” said Jon Clay, director of the Trend Micro International Threats Division . -Standard indirect attacks using extortion programs, as well as stealing data became the norm, so attackers changed tactics to act more secretively, using other attack vectors that were not observed earlier or found widespread use. It follows that business leaders must assess their resources in order to provide sufficient protection that can withstand new and serious cyber threats.“