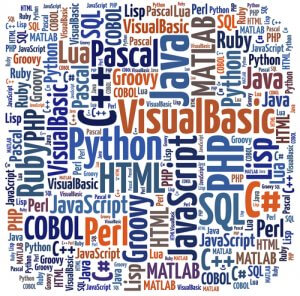 The developer Pierre Carbonnelle (Pierre Carbonnelle) published the rating of programming languages ​​PYPL for September 2018. According to him, Python outperformed the popularity of Java and got on the first line of the list. To calculate the index in PYPL, statistics are used for the search queries of the guides to languages.

To calculate the popularity index in PYPL, statistics on search queries are used. Also, the rating compares the latest data with the indicators of a year ago, that is, in September 2017.

Unlike the TIOBE rating, PYPL C and C ++ are considered together. But even this did not allow languages ​​to get into the top 5. Relatively new TypeScript and Kotlin for the year climbed a few lines of the rating on the 12th and 16th places respectively. Strongly passed the position in 2018 Perl and Delphi.

Dynamics of the popularity of languages ​​from the top 10

The graph below shows the dynamics of the popularity of the AP from the first ten, beginning in June 2004. It shows that the popularity of Java, JavaScript and MATLAB remains approximately at the level of 2004. Also there is a continuous growth of search queries for Python and R languages. In addition, Swift, which appeared in 2014, has not yet caught up with Objective-C in popularity.

Principles of the formation of PYPL

A sharp initial rise can be explained by the principles of rating. The tool calculates popularity based on how often Google users search the web for a language guide. The developer explains that he takes into account search queries with the name of the language and the word “tutorial”. This allows you to exclude, for example, requests with the word Python from users who study the behavior of snakes. The word “programming”, according to Carbonnell, will produce distorted results, because when searching for some languages, for example, PHP, users do not need to specify that it is programming.

This approach distinguishes PYPL from the TIOBE index. The latter counts the number of pages in the network with the mention of a certain language. However, according to the creator of PYPL, the presence of pages does not mean that someone is reading them.

The same system, focused on the search for manuals, displays the number of programmers studying a particular language. Carbonnell sees this as a more reliable source for PYPL. At the same time, when a new language appears, the management’s requests for it are inevitably increased and, accordingly, the take-off of its rating.

The same developer created a tool that tracks the most popular IDEs. Rating of development environments is compiled similarly to PYPL, based on the frequency of search queries in Google with the word “download”.

In the top 5 as of September 2018 includes Visual Studio, Eclipse, Android Studio, NetBeans, and JetBrains, which has grown strongly over the last year IntelliJ. The strongest position was in Xocode in 2018. In the last place is Coda 2.

IntelliJ development tools from the company JetBrains, which strengthened its positions in the IDE market over the last year, also presented the portfolio of AXOFT Ukraine. JetBrains produces full-featured, powerful and easy-to-use software products for development in Java, Python, PHP, JavaScript, VB.NET and others. Get more detailed information about JetBrains solutions from AXOFT managers on +38 044 201 03 03 or e-mail: axoft@axoft.ua

25 Years of Our Life’s Work